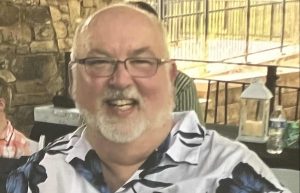 Alan M. Ford, 63, of Imperial, Missouri, died Monday, August 15th, 2022.  He graduated from Humboldt High School in 1977 and attended Pittsburg State University. Upon graduation, he worked as a computer programmer for Phillips Petroleum Company in Bartlesville, Oklahoma and married Mavis Barnett. During his life, he worked for companies in the Tulsa area as well as Wells Fargo in St. Louis, Missouri.

He was an avid reader of science fiction, enjoyed working with computers and technology, watching movies, trying new culinary experiences, and teasing his grandchildren.  He will be greatly missed as a husband, father, and grandfather.