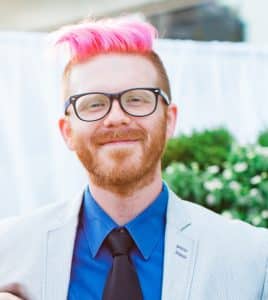 Daniel Scott Williams died on August 23, 2022, at the age of 36. Husband of Stephanie Myles; father of Flannery Myles-Williams; son of Adam (Tania) Williams; brother of Sarah (Rhoda Nazanin) Williams and the late Brendan (Jessica) Williams; misanthropic friend of many.

Daniel grew up in Maplewood and attended Webster University, from which he received a bachelor’s degree and later a master’s degree (which he loved to lord over his wife). He was an audio engineer/editor by trade and a writer by accident, working in the fields of on-hold messaging, podcasting, short films, and teaching. He played the drums real loud in a lot of bands around town, including Commichung, Bear Cub, The Campfire Club, From This We Escape, The Romans Were Right, Another Liability, The Aquatic Record, Everyone Else Is Robots, New Dad, This City of Takers, and Candy Lion (he was only kicked out of two).

Daniel could swing a hammer, place a microphone, change a tire, and cook a hearty breakfast. He once wooed a lady so hard she married him. She demanded a baby and he made it so, because he was a champion. He lived with circus folk and communed with animals.

A private funeral will be held for immediate family only, with a memorial to follow when the time is right. In lieu of flowers (which will be eaten by cats), please send donations to: Missouri Abortion Fund, SURJ.org, Arch City Defenders, or Metro Trans Umbrella Group.