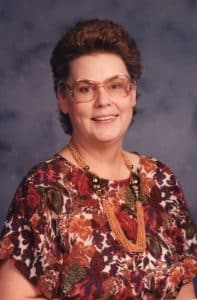 Hazel J. Brown-Farrar (née Jaycox) passed away peacefully on July 29, 2022. She was 87 years old. She was born to Homer and Zelfa Jaycox (née Fisher) and lived in Africa, Ohio on the family farm. She graduated from Olentangy Orange High School in 1953 and in 1957 earned her bachelor’s degree in Elementary Education from Marion College (now known as Indiana Wesleyan). It was there that she met her husband, David Brown, and they were married June 10, 1956 at the Africa Wesleyan Church.

Hazel and David moved to Olathe, Kansas while her husband completed his studies at the Nazarene Theological Seminary. They were partners in ministry, having pastored at churches in Indiana, Kansas, Ohio, Wisconsin, and Oklahoma. She worked as a teacher, first in Elementary grades, and later taught kids who had trouble with reading and study skills. She also tutored adults, too. Hazel also wrote essays, short stories, greeting cards, and even a Christmas Cantata, but in particular, she was known for her amazing puzzles. Some of her puzzles are in “The Facts of Acts” and “The Holy Bible Wholly.”

After David died in 1995, Hazel moved to St. Louis to be with her daughter. She began her ministry at Webster Groves Church of the Nazarene, as a Visitation Pastor. Hazel visited the shut-ins and nursing homes, had prayer with those in the hospital for surgery and sickness, and there were many babies that she prayed for as newborns (and was one of the first people to hold them).  She worked in the church office, as well as teaching Sunday School and assisting with the services. People received cards from Hazel for birthdays, anniversaries, for sympathy, and hope. She retired at 78.

She met Jesse Farrar at church, and on November 23, 2003 they were married. They were sweethearts, who enjoyed a good game of Scrabble and listening to the Bill Gaither Vocal Band. She was blessed for 3 ½ years to be his wife, before she was widowed again in 2007.

Hazel loved The Ohio State Buckeyes, and after moving to St. Louis was a fan of the St. Louis Cardinals. She was funny, and quirky, and had a great sense of humor. She journaled every day: the names of the people she visited, the weather, phone calls she made…but the overarching theme was prayer for her family, for people in the church, for guidance, for knowledge, and for God to have all of her.

She was preceded in death by David Brown; an infant daughter; her son, Keith Brown; brothers Raymond Jaycox and Edward “Teddy” Jaycox; and Jesse Farrar.

She is survived by Kara (Greg) Dubis, and grandchildren Hunter Dubis and Samantha Dubis, and several nieces and nephews.

Hazel wanted to say thank you to all her friends that came to visit her, and helped her cope with Parkinson’s disease. Special thanks to Southview Memory Care, and Manor Grove of Kirkwood, and Kindred Hospice for their loving care during her final years.

A memorial service will be held at 10:00 am on Saturday, August 13, at Webster Groves Church of the Nazarene. Memorials may be given to WGCN Youth Ministry.