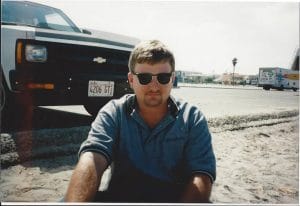 Jason Edward Moss, 51, passed away on 1/20/21. He leaves behind his wife, Christine, and their three wonderful sons, Ian, Spencer, and Oliver, his parents Richard and Ann, and his brother Jeff.

Jason had a great life with many adventures. He grew up in Collinsville, Illinois. He wanted to be an astronaut as a young man and attended Space Camp. He joined the Navy and sailed all around the world. His love for computers would shape his working career throughout the rest of his life. He earned his bachelor’s degree from St. Louis University. In 2005 his greatest adventure began when he learned that he was going to be a father to triplets. Jason was a doting father to his boys. They shared a love for cars, trains, space, airplanes, and camping. He was a Boy Scout leader.
Jason was a wonderful husband, father, son, brother, and friend.
There will be a memorial service once Covid 19 will allow. In lieu of flowers, donations can be made to a gofundme account set up for his family. www.gofundme.com/f/jason-moss-covid-medical-fund