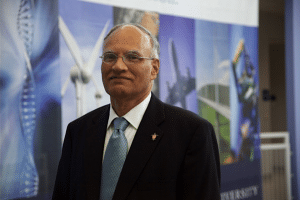 On December 2, 2021, Krishnaswamy “Ravi” Ravindra passed away peacefully with his beautiful wife and lifelong partner, Alaka, by his side. Ravi was born in Mysore, India, and grew up with 3 brothers and 2 sisters. His love for engineering and education began at an early age and never abated. He pursued and completed his engineering training in Mysore Engineering College and further studies at the International Institute of Information Technology Bangalore, India. Ultimately, he obtained his Doctor of Philosophy from Penn State University in State College, PA.

He was passionate about many things. First and foremost, he was a husband and father; his passion was engineering, which he displayed both at home and at work. He devoted his professional life to educating the future mechanical and aerospace engineers of the world. His teaching career began at Dowling College in New York, and in 1987, he moved to Parks College as a faculty member of Saint Louis University (SLU).

During his 34-year tenure at SLU, he helped grow and mature the engineering programs, which included the transition from the Cahokia campus to the modern Midtown landscape as well as the establishment of the graduate degree program at Parks College. Ravi was instrumental in starting three new programs – mechanical, biomedical, and civil engineering at Parks. He had the privilege of leading the Department of Aerospace and Mechanical Engineering for 14 of those years and the college as Associate Dean for 5 years, but he was always eager to be with students in the classroom, labs, and outside, which he did until Spring 2021.

Colleagues remember him as a kind, caring, honest, and fair individual who helped them to achieve their greatest potential. Through his long career, he received many accolades, from a Professional Engineer license to the recent 2020 American Institute of Aeronautics and Astronautics (AIAA) Faculty Advisor Award given for his excellent leadership in higher education with AIAA at SLU. His most important accolades, however, were not awards but rather mentoring his students, watching them succeed professionally and in life, and keeping in close contact with them.

At home, Ravi was a devoted husband and father who similarly wanted to see his family succeed. He married the love of his life, Alaka, in June 1977, in Mysore, India. The two built a life together, first by venturing away from their families to the United States in search of education and opportunity and later by raising a family in Saint Louis. During their 44-year marriage, Ravi and Alaka traveled and explored the world together, making the most of their life by having fun and enjoying time with one another. In just the last decade, they adventured across the United States, Spain, India, and China. They raised two sons, Arjun and Vijay, and he was unbelievably proud of their accomplishments.

Ravi led his life with the utmost grace, forgave easily, saw the good in everyone and helped them to see the good in themselves. He was always handy with a joke, a smile, and some sage advice to bring clarity to any situation. What his loved ones will remember most about him was his thoughtfulness and willingness to help others without hesitation. His drive and commitment to excellence were unmatched and he motivated others to greater heights than they believed imaginable. He was an inspiration to those who knew him and will be forever missed by all who knew him and were touched by his kindness, love, and grace.

He is survived by his wife, Alaka, and his sons, Arjun and Vijay.