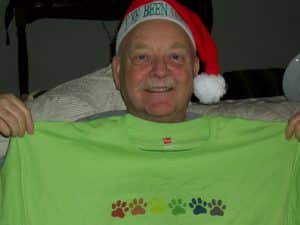 Larry was born on 11/3/1945 to Leo Sural and Eva Marie Arnold in Portland, Indiana. After he graduated high school, he attended a technical school for a diploma in electricity before joining the Navy to serve his country. After serving his time as an Ordinance Mechanic, he continued his education at Ball State University to receive a Bachelor of Science.

He started his long career (47 years) as an electrical engineer with Westinghouse, which later became ASEA Brown Boveri (ABB), from which he retired in 2012.

In 1999, Larry met his spouse Don in St. Louis, Missouri. They lived in Alabama, Tennessee, and finally landed in Missouri in 2012, where they bought a house.

After retirement, Larry spent his time growing his orchids and working to make his house the perfect home. Many do not know that he loved animals and had several rescues over the years. He was a passionate advocate for human and animal rights.

According to Larry’s wishes, there will be no service. He wanted everyone to remember him as he was and to celebrate his life. He touched many lives and was well-loved, and will be missed by all who knew him.