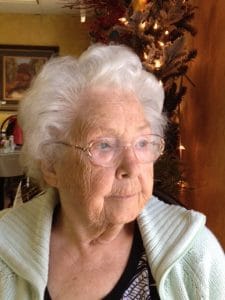 Margaret Elizabeth (Feaster) Steel passed away on June 16, 2022, in Creve Coeur, MO.  Born on February 24, 1919, in Withers Mill, MO, Margaret was the third daughter of Daniel Lilburn Feaster and Nancy Cleo (Chipman) Feaster. She was preceded in death by her loving husband, Adrian Lee Steel, and her sisters, Lois Swinford and Ada Mary Max.  She is survived by her son Adrian Lee Steel, Jr. (Karen) of McLean, VA  and daughter Julia Margaret Bono (Chuck) of Franklin, TN.  She is also survived by her niece, Barbara (Max) Lavender of Boulder, CO and four grandchildren, Abigail, Benjamin, Elizabeth and Ashley.  One of her great joys was spending time with them painting, cooking, playing cards, and gardening. She was also blessed with six great grandchildren and numerous nephews and nieces and cousins.

Margaret graduated from Soldan High School in St. Louis in 1937. After graduation, Margaret began a secretarial career. Margaret joined the American Red Cross in 1943 and was assigned to the American Red Cross’s Roosevelt Club in Manila in the Philippines.  She worked as a staff assistant helping with USO tours and with programs and activities at the Club.  After the war, she returned to St. Louis in 1946 and went back to work for the Red Cross.

Margaret and Adrian met before the war at Euclid Baptist Church.  They rekindled their relationship after the war and were married on February 22, 1947, in Lexington, KY. (Adrian met Margaret at Union Station when she returned to St. Louis after finding out from her parents when she was to return.)  After living in south St. Louis, they moved to the suburbs and lived in Florissant.  Faith played an important part in Margaret’s life, and she and Adrian were members of Florissant Presbyterian Church where they were very active. Margaret was involved in a number of volunteer activities in Florissant, including city commissions, the PTA, scouting and the Maryville School for children in need.  Margaret was an accomplished painter, loved to play bridge, and enjoyed her beloved backyard garden and flowers. She had a special love for the family’s pets, including Snowflake, Tilly, and Sadie.