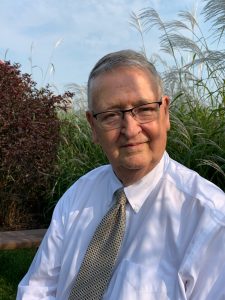 Reverend Levering Reynolds, III, died peacefully on January 2, 2022 at the age of 81 at his home in St. Charles, Missouri. Lev’s commitment to his family, faith, and community were evident to all who had the privilege to know, love, and learn from him.

Born in Peterborough, New Hampshire, Lev lived in 11 states and travelled to all but one. His love of the outdoors, including hiking and camping, began in childhood as a 9-year-old Cub Scout in Andover, Massachusetts. He was a dedicated Boy Scout for more than 70 years serving in various leadership roles with Boy Scouts and Sea Scouts. Lev worked with scouting at local and national levels in support of inclusivity and outdoor experiences for all. He attended multiple Boy Scout Jamborees to serve as a chaplain.

Lev graduated with a Bachelor of Philosophy from Stanford University in 1962, followed by a Master of Divinity from Yale Divinity School in 1965 and a Master of Counseling and Development from Texas State University – San Marcos in 1991. Lev continued to learn, research, and teach throughout his life. Countless people have grown in their spirituality, outdoor and safety skills, and general knowledge thanks to Lev.

In 1965, Lev followed his father’s footsteps into ordained ministry through the United Church of Christ. In his nearly 57 years of ordained ministry, Lev served many churches. He primarily served in the role of Interim Minister, helping congregations navigate the process of identifying a permanent pastor. Lev also served in leadership at the Conference level for the United Church of Christ. Lev was a humble and gifted preacher and storyteller. He was able to lead in the spiritual formation of others by providing opportunities for introspection and personal growth.

Lev married Gail McKeen in 1965. Together they raised three sons. After her death in 1997, Lev continued to support Rev. Gail’s commitment to Emmaus Homes, which provides support for adults with developmental disabilities. He most recently served as their Board Chair with his term ending this Fall. His commitment as a volunteer was also evidenced in his more than 20 years as a volunteer with the Red Cross. Lev worked as a local volunteer, was an Instructor Trainer, and deployed to help coordinate the agency’s disaster response several times, including after Hurricane Katrina. Red Cross friends have expressed he trained too many volunteers to count. His work with Emmaus and the Red Cross illustrates his compassion and his commitment to the service of others.

Blessed in marriage in 1998 to Linda Persov Bartels, Lev’s family grew to include two ‘bonus daughters.’

With “empty nest” in sight, Lev encouraged Linda to discern her call to ministry and she earned her Master of Divinity from Eden Seminary in 2002 and was ordained that same year.  Their years together were filled with opportunities to be in ministry together (but apart, with different congregations) in Missouri, Minnesota, and Southern Illinois.  They nurtured their blended family and continued to enjoy time with children and grandchildren around the country, always grateful for the “excuse” to travel.

Family and faith were at Lev’s center. An avid genealogist, researching and recording the family trees of family members related by birth or related by life circumstance was demonstrative of his extended love for all of us. Lev’s participation in the marriages, baptisms, and life celebrations of his children and grandchildren will be forever cherished, as will his dry sense of humor and his unconditional love.

He is preceded in death by his parents, Reverend Dr. Levering Reynolds, Jr. and May Louise Mosher Reynolds, and his wife Gail.

A celebration of Lev’s life is scheduled for Memorial Day weekend.

Gifts in his memory may be made to: