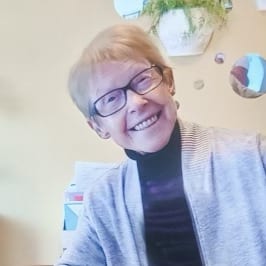 Rita was born on January 18, 1942, in St. Louis, Missouri. She was one of five siblings. Rita met Tom in her teens, and they married in 1960.  Together they raised five children and weathered all the ups and downs of life. The last 23 years of her life included multiple fights against cancer.  She put her Irish feistiness to the test on seven separate occasions. Rita credited her faith in God’s plan for giving her strength in these battles. She was an inspiration of perseverance to countless people.

Rita was “The Boss” supporting her husband Tom’s career in law enforcement for 51 years of service while also running their home. As her children reached adult age, she then became a pivotal supporting role in raising her grandchildren, offering advice, care, and the most magnificent Christmases they could ever imagine. In addition to her role as a strong family leader, Rita would go to “work” making sure slot machines were functioning well throughout the country.

Rita has her adoring husband Tom, their sweet daughter Katie and precious granddaughter Danielle in Heaven, who have been patiently waiting for her. She is preceded in death by Joseph and Stella McCormack, brothers Tom and Larry, and sisters Pat and Virginia.

In lieu of flowers, please make donations at: