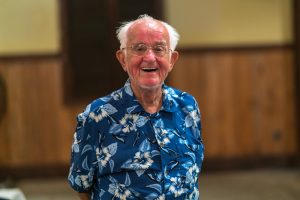 Robert “Bob” Olsheske went home to Jesus on November 23, 2020 due to complications from Covid at SSM Health St. Clare hospital in St Louis county. It was 2 days after his 86th birthday. Due to dementia, he was living at St. Andrews at Francis Place Nursing Home in Eureka. He absolutely loved the staff and all its residents.

Bob was born November 21, 1934 in Milwaukee, Wisconsin. He spent his early years in the Wisconsin area and moved to O’Fallon, Mo. after his marriage to Betty J. (Clapp) Olsheske. Soon afterwards they moved to the Wentzville area where they remained until Betty’s early passing from cancer. They were married 36 years and raised two children.

He later moved to Eustis, Florida and married Catherine DeMark. They were married 25 years until her passing. He was always a devoted husband, parent, and grandparent.

Bob was the last living member of his immediate family. He was preceded in death by his parents, Ervin and Catherine (Williamson) Olsheske as well as his siblings, June Olsheske, Shirley (Olsheske) Arndt, Kathleen (Olsheske) Reed and Ervin Olsheske.

Bob was in sales most of his adult life and spent the largest amount of time in the bread business. He worked for Taystee Bread and later operated both a Pepperidge Farm and then a Brownberry distributorship. He was heavily involved with the church and spent his entire life spreading the word of Jesus Christ. He was also involved with Carpenter’s House for Children in Florida where he helped in obtaining the funding and support of this home for special needs children. He was a grandparent to them all. We have been overwhelmed by all the stories shared with the family of how he mentored others and how much he was loved.

There will be a celebration of life at Wentzville Christian Church December 5 at 11 am. In lieu of flowers, memorial donations may be made to your favorite church or charity