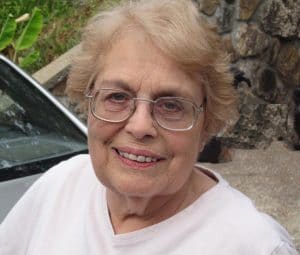 Rose Beatrice “Bea” Gillooly died of Covid 19 on November 18, 2020. She was 98 years old and suffered with dementia the last several years of her life.

Born in Bellaire, Ohio to Dominic and Giovanna Corapi, she grew up in an Italian community overlooking the Ohio River and across from Wheeling, WV. She moved to Dayton after high school, took college courses, and worked in secretarial positions. There she met her husband, Richard “Dick” Gillooly who was stationed at Wright Air Field in the Army Air Corps.

After they married and Dick had completed his graduate work, he was recruited by James McDonnell to move to St. Louis and work for what was then McDonnell Aircraft, and is now Boeing. He went on to have a long career in space exploration from breaking the sound barrier to deputy director of the Skylab guidance system. They settled in Ferguson, MO, were parishioners at Sts. John and James Church and went on to have 10 children. Dick died in 1980.

Bea’s two passions in life were traveling and reading. Beginning in 1968, and as often as she could, she traveled the world. She visited multiple countries on six continents, taking photos whenever possible. Reminiscing of those trips when viewing photos brought her great joy over the years. In her early St. Louis years, Bea joined a women’s book group and continued to meet monthly to discuss books, politics, and current events for over 50 years. In addition to raising 10 children, Bea was an active volunteer. She started a rental book system at Sts. John and James allowing families to pay a small annual fee to borrow books for the school year and not have to purchase new sets for their children each year. She was involved in The Experiment in International Living, allowing children and students from other countries to temporarily live with host families in the St. Louis area. She went on to become a board member of that group as well as a docent for the First Street Forum, a contemporary art gallery. She was also involved as a volunteer for the ScholarShop for many years.

In addition to her husband, her daughter Kate, preceded her in death. Bea leaves behind 9 children: Robert, Ann, Michael, Marian, Kevin, Jane, Megan, Brian, and Sean; multiple grandchildren and great grandchildren, and a sister, Patricia Harris of Montgomery, AL.

Many of her children would have been with her in the end if she hadn’t been isolated in a Covid 19 ward for her last two weeks. We hold the Trump administration directly responsible for robbing us of the opportunity of saying goodbye to our mother.

A private memorial service will be held in the near future. In lieu of flowers, donations can be made to Mother of Good Counsel Home or the Ferguson Library.