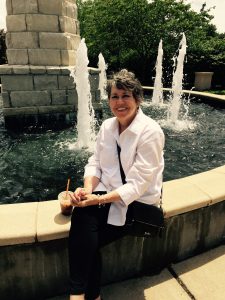 Reverend Doctor Webb was born Suzanne Jean Martz, on January 25, 1947, at St. Vincent’s Hospital in Indianapolis, Indiana, the only daughter of Dr. Carl and Jean Martz and middle sister to Tom and Jim Martz. Suzanne, or Suzie to her family- and Buck Buck to her grandchildren attended DePauw University with the original intent to follow her father’s footsteps in a life of medicine. It wasn’t long before she changed majors and found her calling to the church, forging a path of activism and community leadership that lasted her entire life. In 1967, she began her fifty year career in ministry when she started her own storefront ministry in downtown Indianapolis, after being denied placement in an existing church.

She married her husband, Max, also a minister with the Christian Church (Disciples of Christ), in the early 1970’s in Atlanta, Georgia. The two of them moved to Texas, where in 1977 her son Christopher was born. In 1980, Max was called to be a senior minister in Kalamazoo, Michigan, where they would divorce a few years later. Although never officially finishing seminary, Suzanne received her Doctorate in Educational Leadership at Western Michigan University while living in Kalamazoo and raising her son as a single mother. She and Christopher remained in Kalamazoo, where she was ordained and served as the Associate Minister with First Congregational Church until 1989 when she was called to lead the First Christian Church (Disciples of Christ) in Carbondale, Illinois. While living in Carbondale, Suzanne’s career began to flourish. She worked closely with denominational leadership and began a focus on ecumenicalism, working with the Council of Christian Unity. It was this work which led to her meeting and being in conversation with Pope John Paul II, as well as Pope Benedict XVI and Pope Francis, in addition to other world religious leaders. She left Carbondale in 1998 to move and study in Bossey, Switzerland, deepening her focus on ecumenicalism. Upon her return to the US, she worked as an Interim Minister in Blaine, Michigan, before moving on to serve as an Interim Minister at Park Avenue Christian Church in New York City, where she lived through the 9/11 terrorist attacks. Following her stay in New York, she became the Interim Regional Minister in Ohio, a position which carried with it the title of Bishop. She remained in Ohio until 2004 when she was called to serve as the Senior Minister at Union Avenue Christian Church in St. Louis, Missouri. She remained in service to that congregation for 13 years, until her retirement in 2017. She served on multiple boards including, but not limited to, Eden Theological Seminary, Christian Unity, Interfaith MInistry (formerly Council on Christian Unity), the Christian Church Foundation, and Union Avenue Opera.

Suzanne Webb was a force for good in the world. She fought against injustice, wherever she encountered it, whether in her personal experiences or on a national stage, and her activism knew no bounds. She marched with Dr. Martin Luther King, Jr. in Washington, D.C. during the Civil Rights Movement of the 1960’s and Dr. Cornel West in Ferguson, Missouri in 2014 in the wake of the shooting death of Michael Brown. She advocated for and performed same-sex marriages before it became nationally legal to do so. She was an active ally for AIDS/HIV-positive outreach programs. She believed that everyone who entered the doors of her

church were welcome, regardless of their beliefs, who they loved, or how they looked. She believed in the healing power of prayer, and through her ministry, she sought to soothe the souls of her parishioners as well as help them to open their hearts and minds to the universal nature of love and forgiveness. She preached a message of empathy to all, believing that the true power of universal love lay in the promise of hope and resurrection.

Suzanne truly loved life. Her smile and laughter was infectious. Every room she entered lit up upon her arrival. She was loved and admired by countless people, all around the world. As she neared the end of her life, she spoke at length of being ready for what comes next, knowing that the world beyond would be one without pain or suffering. In the end, she was able to release into a place of peace and serenity, knowing that in her seven decades of life, she had lived a life of service to doing good. Her legacy is one of love, laughter and hope for a better tomorrow. A celebration of her life will take place at a later date.

She is survived by: her son Christopher, his partner in life Jessica, and their children Henry and Portia; her step-daughter Lori and her wife Mary; her brother Jim, his wife Cheryl, and his children Will, Anna and Eli; and her nephew Jonathan.