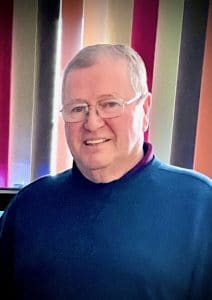 Tom graduated from Wayne High School in 1964, retired from Ford Motor Company in Lorain, OH in 1997, and was a member of the UAW Auto Workers Local 425. For many years he participated in softball, bowling, pool and golf leagues in the Lorain area. After he retired, he worked at Dragon Ranch Golf Course in Amherst, OH. Most mornings you could find him at the Nest Restaurant having coffee with “the regulars.” At the time of his death he worked at Crescent Farms Golf Course in Eureka, MO.

Tom loved his family, enjoyed his grandchildren’s sporting events, and watching sports on TV.  He enjoyed golfing, fishing, cooking, canning, baking pies, gardening, playing card games, doing magic tricks and spending time with family and friends. He felt blessed to have been from a very loving family and had a long list of lifelong childhood friends, coworkers and very special neighbors. Tom was often the neighborhood handyman who helped anyone that reached out, and enjoyed sitting in his driveway to give love and a treat to every dog that walked by. He especially loved his granddog, Cooper.

Memorial services in Ohio will be announced at a later date.