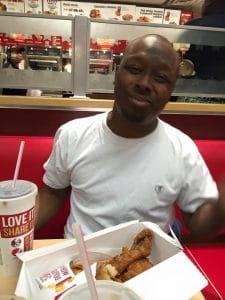 William Edward Merritt, III, passed on August 26 due to complications from COVID 19. He was 51 and beloved by everyone who got to know him. Bill is survived by two younger sisters, Crystal and Pamela Merritt.
Bill was a man-about-town who made friends all over St. Louis. He really enjoyed the city. He graduated from the Judevine Center for Autism with a package of spoken words, signs and social skills to take on the city with passion and zeal.
He loved planes, trains and automobiles (his van, specifically). He indulged his love of aviation at the St. Louis Science Center, watching model airplanes fly at Buder Park and watching birds of prey (owls! oh, how he loved owls) at the Wild Bird Sanctuary and in Forest Park. He also enjoyed riding the Metro to the end of the line and playing train at the Transportation Museum.
In a car or van, Bill really wanted to sit up front and man the radio dial; he was not a fan of newfangled digital bullshit complicating the radio. His favorite station was Magic 108 and he followed the old school jams down the dial when they changed to 104. He once locked in on Earth, Wind and Fire’s “September” and sang it when it was on the radio … and while the radio was off … every minute or two … for three years. His favorite bit was the nonsense phrase “ba de ya de ya de ya” on repeat.
He used basic ASL words and very short sentences; he was hard to understand in many ways if you weren’t paying attention and listening with your whole self. It would piss him off, being misunderstood. He worked for years to learn those words and wanted to be heard! Bill would go off on anyone who ignored him — he hated cell phones, being told to calm down and not being respected. You’d get fussed at, yelled at or if he had really had it, he’d whip off his shoe and bang his head with it.
But most of the time Bill was mischievous, cheerful and funny. He loved to eat fast food and tease you with a French fry. Before the pandemic and recent health challenges, he loved to dine out. He loved McDonalds and Kit-Kats and KFC and Chips Ahoy and Doritos and Lunchables and Pizza Hut and and Imo’s and The Wheelhouse and Pickles Deli. He grew up a Pepsi kid, switched to Dr Pepper in his 20’s, flirted with Pepsi again but finally became a committed Coke man in his 40’s. He also liked to mix flavors at the soda fountain.
In addition to his sisters, Billy loved his direct care staff at EasterSeals Midwest. Well, not all of them. He loved energetic, tireless Black women like Tiara, Trecia and Lay to name a few who had the joy of dealing with him. He was also particularly fond of the nurses and sitters at Mercy South, the staff at Creve Coeur Dental and the doctors and staff at Family Care Health Centers. All of these folks accept Medicaid and warmly welcomed and supported Bill.
Bill faced intersectional challenges as a Black man, as an intellectually disabled man, as a poor man, as a Medicaid patient and as a managed care client. A fitting legacy would be for the community to meet at that intersection and continue to do the work. Action St. Louis has agreed to take on this challenge and guide the work; learn more and donate here: https://actionstl.org/donate If you can’t donate, please go see one of the local attractions Bill loved and think of him with a smile.